“The more youth begin to recognize that they have a voice, the more change is possible” — Usher

“I am the youth. I believe that my voice matters and could make a difference to bring equality.” — Votey

In the current situation, many major global issues are threatening the lives of humanity, the natural environment as well as lives of endangered species out there. It is a significant concept that we all should collaboratively solve for a better world. I believe that the youth of this generation are raising their voices for positive changes in their communities and the world. As a teenage girl, I also want to contribute my voice to talk about some mattered issues as well.

In the afternoon of December 21st, under the theme of “Creating the Spark”, The Annual Youth Talk was held in Nesson Cripps Academy. It was an extraordinary event that youth of grade 9 to grade 12 had the enormous opportunity to raise their voices and talked about an issue they are passionate about. The event sparked with amazing speakers each talking full of inspiration and passion.

I was honored to be one of the speakers that had the moment to share my ideas with hundreds of people. Since the beginning, I have always been passionate in talking about gender inequality in Cambodia, as well as the world. Through different summits I have attended, I think there’s still the barrier between gender in society. 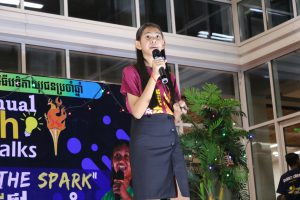 My topic was about gender equity and equality in Cambodia society. Mostly from the past up to present, there seem to be various aspects toward gender, especially with discriminations and inequalities. In culture, girls are defined as weak, because people tend to think that they are often both emotionally and physically weak. However, this aspect doesn’t seem to be right at all. 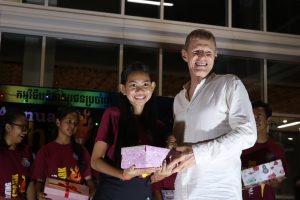 The purpose of my speech was indeed to change people’s mindset toward this issue and see the world equally treat both genders. In society, this kind of issue is rarely discussed and dialogue in the events. I believe that my speech had changed their mindsets so that this world can be full of equity, equality, and justice.