Robotics was an exploration where I and the other three students from the Liger Leadership Academy, preparing for the 2019 Guangxi Adolescent Robot Competition and the ASEAN National Adolescent Robot Invitational Tournament that head in Wuzhou, Guangxi, China.

It was a memorable memory for all of us, to be privileged to represent Cambodia to compete with other ASEAN and China teams. We were the first and only team from Cambodia and our team named was NORAKBOT. It was a Lego League which we designed our robot to complete the missions on the board under the theme of Into Orbit (Space). Even though the tournament had some confusion rules, our team could adapt to it quickly and perform the best we could. During the competition, our team put our best to be as flexible as we could. 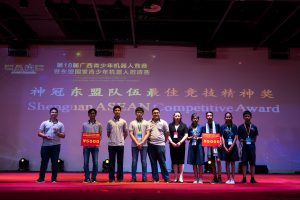 It was our honor of representing Cambodia in such an amazing competition. We had one whole day competition and the other days of exploring different places such as the Museum of science and technology and the ASEAN theme amusement park.

One of the nights during this trip, our team participated in the Culture Exchange where all the countries shared their wonders to each other by having different performances such as dance, sing, and more. 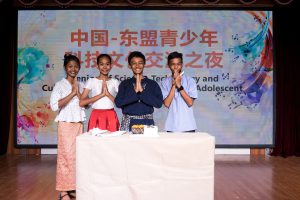 In addition, It’s the way that introduces Cambodia and its culture to other countries in the competition. Especially, our team was honored to hold our Cambodia’s flag in this Science-Technology competition.