This is my first time to be a part of robotics exploration. Our goals were to learn how to create a wonderful robot and come up with a great idea of problems and solutions of water to join FLL robotics competition. FLL stands for the words First Lego League which is a robotics competition that challenges kids to think like scientist and engineers.

During  this competition, teams will choose and solve a real-world problems and program robot using Lego Mindstorm technology to solve a set of missions in the robots game. There were two teams from Liger. My team’s name is Nerd 2 and there are five people including me in my group. We worked hard as a team and tried our best in this competition. We worked hard on researching, coding and design robot. We tried our best to do it but our goal was to get experience. Win or lose was not important for us. 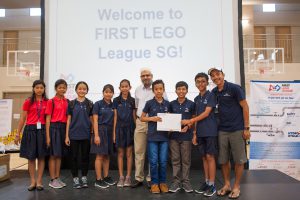 It was our first time so our robot was just simple but it needed to be creative of making it’s head because we did different missions. This year the topic of the first Lego League competitions is hydrodynamic which is about water. We did the research about the problem and solution about water to do  a presentation. Our teams came up of problem and solution about arsenic that is a real problem that Cambodia is facing.

On 27, 02, 2018, it had a opportunity to go to other country and get a great opportunity to compete with other teams from different countries. I went to Singapore. It is a developed country and I got to explore new different things. I hope that in the future Cambodia will be the same as Singapore. On the first day, when I arrived at the airport, I looked around and saw many great things such as tall buildings, sky train, designing of road, garden, houses , transportation and those things are very unusual things that I see everyday.

I and one of my other friend got to stay with a host family in Singapore. I stayed with Asa’s family for five days. They were very friendly and I played with their children,too. In addition, I spent a very wonderful time with them. Staying with hosting family helped me to know t about people’s life in other country​​ and to flexible in situation. In the second day, we prepared our robot and let the robot friend different missions.

The third day was the competition day. There were many people and teams came from other countries join this competition. There were over an hundred teams. That means I was so proud of Cambodia that join this competition and I was also excited to represent Cambodia. When we were competing, our robot worked well and we communicated very well in each other in the group. Something could not compare to my feeling at that time, I was very very nervous but I could do it. The other part of the competition was presenting. We presented our idea really well to the judges and the judges were happy to see our idea. The idea was about the arsenic water problem which is a problem that is facing in Cambodia.  Later on, my team went to the final round. My feeling was mixed feeling condition like nervous and happy. But in the third round, I felt normal and simple. Trip to Singapore, I visited many places. I went to botanic garden with my hosting family and there were beautiful flowers, birds and trees. I also went to the museum and learned many interesting history.

In conclusion, this robotics exploration helped me to learn many many things and make changes in our country too. I could represented my country in the competition and make other country to know more about Cambodia and also present Liger. In addition, I and my team could solve the water problem the face in the country.